Hazardous Waste Treatment in 2020 is Expected to Reach More Than 1800 Billion and "Golden Age" Has Come?

The Ministry of Environmental Protection recently announced"2016 National, municipal solid waste pollution prevention and control of the annual report"（Hereinafter referred to"2016 Annual Report"）show, The country's hazardous waste treatment capacity has improved significantly.By the end of 2015，A total of 2034 certificates of hazardous waste (including medical waste) issued by the provinces (autonomous regions and municipalities), An increase of 113 over 2014, Hazardous waste management unit of the national approval of hazardous waste treatment capacity of 52.63 million tons / year.Representing an increase of 9.59 million tons / year over the same period. 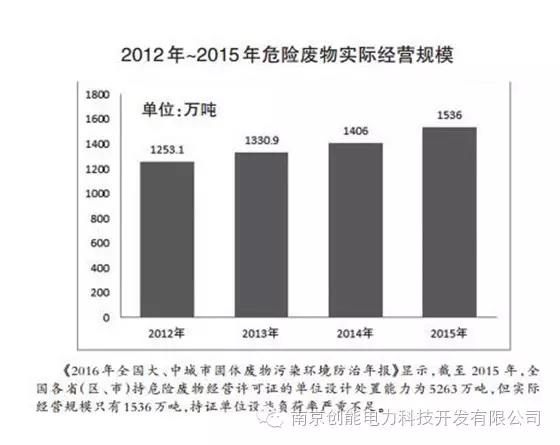 During the"13th Five-Year Plan" period, the hazardous waste may be the full implementation of the accounting system, a number of cross-border who are strong to seize the hazardous waste disposal market, the industry profit level is higher and the profit rate stabilized.

In recent years, with the governance of waste-related laws and regulations, policies promulgated and implemented, more governance needs continue to be released.In June 2016,with the new version of "National List of Hazardous Wastes" (2016 version) of the implementation, to promote the management of hazardous waste to a scientific, detailed. " The 10-Chapter Soil Pollution Action Plan" stressed the need to strengthen the source of industrial waste pollution control, the control of hazardous waste as a key.

There are people in the industry revealed that during the "13th Five-Year Plan" period, the risk of waste may be the full implementation of the accounting system, the illegal disposal of hazardous waste will be further curbed, and gradually strengthen the dynamic supervision of hazardous waste, control will be more standardized and more stringent.

At present, the hazardous waste treatment market profit level is higher and the profit rate stabilized.Huarong Securities analysts said: "The main means of disposal of hazardous waste, including the comprehensive utilization of resources and sound disposal of two kinds of resource utilization by the disposal of enterprises to the upper reaches of waste production enterprises pay to buy, and then extract the resources of the products sold the harmless disposal is the disposal of enterprises according to the government to guide the price of waste to the production and waste enterprises, of which the use of resource utilization of the price of metal prices by the impact of fluctuations in the sound disposal approach due to short supply, the higher level of profitability in recent years steady rise. "

Disparity in processing capacity across regions

It is suggested to construct a regional hazardous waste management platform and give full play to the processing capability of the enterprises. It can encourage the key production and waste enterprises to self-construct and dispose of the facilities and release the market vitality.

Although the current hazardous waste management industry also belongs to a blue ocean.However, the uneven distribution of regional capacity, poor coordination, lack of technical personnel and other issues,actually still influencing the full play of the market dynamics and the actual disposal treatment effect.

"These groups of comparative data shows that, at present, the domestic production of hazardous waste and the actual operating scale is not balanced." Insiders said that while the market there are some hazardous waste processing enterprises "enough to eat" and some " cannot finish so much ", and some enterprises can not find hazardous waste disposal channels and other issues.

2016 Annual Report   also shows that as of 2015, the provinces (autonomous regions and municipalities) in possession of hazardous waste business license unit design and disposal capacity of 52.63 million tons, but the actual operating scale of only 15.36 million tons, the permit unit load rate insufficient.This also confirms that some licensed enterprises "not enough to eat" phenomenon.

Whether can try to deal with the hazardous waste can not be transferred out, so that there is a place to deal with capacity? Some companies reflect the idea in theory feasible, but the actual operation is not easy.According to the relevant provisions of the state, the transboundary movement of hazardous waste need to move out to the receiving and receiving levels of environmental protection departments for approval.If the inter-provincial transfer, from the transfer to the acceptance of the need to go through the county, city, provincial and other six levels of approval which lasted as long as six months, during which solid waste enterprises have been in the plant area has been stacked.

China Environmental Protection Industry Association of Solid Waste Treatment and Utilization Committee of the relevant experts further suggested that the national hazardous waste pollution in prominent industries and regions, a comprehensive and in-depth investigation and study, including hazardous waste generation, disposal, use and related enterprises, the situation.On this basis, the establishment of key regional key industries hazardous waste management database, in order to strengthen the management of hazardous waste to provide basic support.

Comprehensive utilization and harmless disposal is the development direction

Emphasis on research and development of advanced and comprehensive utilization of hazardous waste technology and equipment, establish a sound and effective waste recovery system is China's resource recovery and recycling priority.

"In recent years, hazardous waste treatment industry to accelerate the pace of development, with the industrial product technology updates, the types of waste are expanded and changes, so the new technologies will emerge as the times require, and comprehensive utilization, harmless disposal is still a big development", Huarong securities analysts.

The bulk of industrial solid waste must strengthen the "give priority to in order to use the policy of" change "is given priority to with store" in the past. Increase the comprehensive utilization technology of r&d, to encourage large-scale use and encourage the use of high value-added products.

It is imperative to establish a sound, regular, legal and effective waste recovery system for resource recyclable wastes, especially waste electrical and electronic products, waste lead-acid batteries and other city mine wastes, which is the urgent matter of resource recovery and recycling in China.

In addition, "strengthening the capacity of hazardous waste treatment and disposal facilities, but also vigorously strengthen the management of hazardous waste treatment facilities and technical staff training to enhance the operational management of existing facilities, the level of guidance to small-scale, decentralized workshops and enterprises into specialized park, and to carry out its special study of pollution prevention. "Insiders suggested.

Next: In 2017 Prospect and Development Trend Forecast of China's Environmental Protection Industry Market